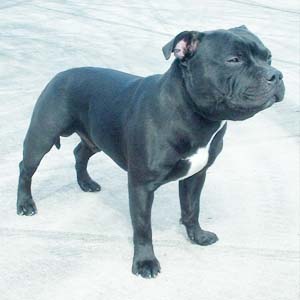 What is known about Staffordshire Bull Terrier history?

The Staffordshire Bull Terrier is derived from the same lines as the original American Pit Bull Terrier. Due to show ring bias over the past century, registry politics, and geographical divisions, the breed, however, has taken on a slightly different look in that it is more squatty, and the muzzle tends to be shorter with a more defined stop. Even amongst the breed itself, there can be striking differences between those used for show vs. work/farm/pet purposes, with the show variety tending to have the shortest muzzles.

Since the American Pit Bull Terrier was made illegal, many have simply renamed their Pit Bulls to the Staffordshire Bull Terriers in an attempt to avoid prosecution.

In many places around the world, laws known as breed-specific legislation ( BSL) limit various breeds, with bully breeds being the most common focus. Due to this, the Staffordshire Bull Terrier also often finds itself on such lists.

Myths that have been falsely perpetuated on the breed are that it has a locking jaw and that it has been historically bred to fight. Both are untrue.

In 1835 when Britain made bull and bear-baiting illegal, this caused many to shift to fighting dogs against one another. However, based on statistical and historical analysis, it is still believed that less than 10% of such dogs have ever been fought, even when the practice was legal or accepted.

Even the most notable dog man in history John Colby, said that less than 10% would ever meet the criteria needed for being used for fighting purposes. So while it is true that SOME have historically bred the breed to fight, it is a misrepresentation to blanket the entire breed with this stigma. If this is the criteria in which we judge things - where the minority taints the perception of the majority - that is equivalent to saying humans have historically bred to be rapists, murderers, and child molesters. Those who perpetuate this ideology are either ignorant of the facts, are seeking to perpetuate such myths for their own personal gain, are dogfighters themselves, or are using the idea as a crutch against their own personal insecurities to support a false bravado. For the well-being of the breed, anyone interested in acquiring a Staffordshire Bull Terrier should avoid those who irresponsibly misrepresent it in such a way. The truth is the breed has historically been bred – based on its majority use – to be a farming, hunting, guarding, and family dog.

Because the breed shares much of the same history as other molosser and is directly related to the American Pit Bull Terrier, it can be considered a good candidate in the now developing American Bully breed. This is especially true for those wishing to breed to the smaller American Bully standards.

What are the Staffordshire Bull Terrier breed standards?

Eyes:
Dark preferable but may vary based on coat color

Color:
Red, fawn, white, black or blue, brindle, or any one of these colors with white