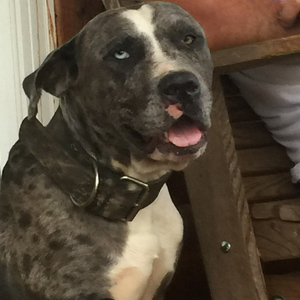 What is known about Catahoula Bulldog history?

The Catahoula Bulldog is a more recent breed that has resulted in crossing the Catahoula Leopard Dog, American Pit Bull Terrier, and other bulldog beeds of similar lineage. This is a breed considered to still be in development, much like that of the American Bully. Due to the breed's current developing nature, a more formal standard has not been derived as the breed is still undergoing a stabilization in its looks and traits.

Since 2005 when the UKC and ADBA stopped registering purebred Merle Pit Bulls, many of the Merle Pit Bulls have been falsely registered as Catahoula Bulldogs. For the Merle Pit Bull owner that found themselves alienated by the recent changes in the Pit Bull conformation standard by the ADBA and UKC, many felt they had no alternative but to give in to the pressure and propaganda and thus register their Merle Pit Bulls as such.

Unfortunately, while this did not really affect the Catahoula Bulldog as a breed since it is still in development and was founded on the Pit Bull anyway, this did affect the historical nature of the purebred Merle Pit Bull as it gave a false err in belief to those that made the claim that the Merle Pit Bull was not pure to the breed. Without historical context or honest knowledge, many have used statements in ignorance or bias that the Catahoula Bulldog was evidence the Merle Pit Bull was not pure. Most such statements came from hearsay without any true research on the part of those making the claims. Because the UKC and ADBA would not show older published versions of their original standards for the American Pit Bull Terrier standards, which did include the acceptance of Merle, this seemed to back up such erroneous claims. This was an attempt to whitewash and change the Pit Bull breeds documented history, much to the delight of those that wished Merle removed simply due to their own bias.

Deafness has been reported in the Catahoula Bulldog and other breeds that contain the Merle gene. In most cases, this can be attributed to primarily white specimens, as this indicates a lack of melanin that also contributes to the auditory development of a dog. Other significant factors that lead to deafness are the lack of genetic diversity perpetuated by irresponsible inbreeding. It is essential to understand the effects genetics have when breeding, especially when it comes to Merle genetics. While the Merle genetic trait has been reported to have been discovered, such claims were later proven to be false. As of yet there still remains no test that can accurately identify Merle genetically. Because of the known links to deafness, high levels of white and inbreeding have proven that those who do choose to breed Merle should take precautions and breed in such a way that limits the inbreeding effect and breed darker specimens to ensure higher levels of melanin. When properly bred, this and other breeds affected by Merle genetics have not proven to have any higher risk of deafness or negative health impacts than any other breed.

In our own research, when inbreeding has been limited and primary whites excluded in breeding programs, there has been no increase in deafness or other negative health effects often theorized about Merle breedings. Some believe it is unethical to breed in such a manner, but others claim that they have great success in such breeding when they did control other factors such as ensuring proper genetic diversity and only breeding to darker colors.

While no conclusive well-reviewed evidence has been developed against Merle to Merle breedings, anyone considering such should take great care and first take their time to understand the Merle trait in greater detail. If one does decide to move forward with such breeding, they should seek to eliminate or reduce other risk factors as much as possible. In the end, this is a breeder beware scenario as a bad litter can lead to the need to cull pups in order for them not to add to an unwanted pet population.

This breed finds its greatest acceptance in Texas and Louisiana due to its great wild boar hunting prowess and the need in these areas to use such working dogs to limit the population of wild hogs.

Because the breed shares much of the same history as other molosser breeds, it is not a surprise that it bears a strong resemblance to the American Pit Bull Terrier. Because of such shared lineage, the Catahoula Bulldog breed can be considered a good candidate as part of the now developing American Bully foundation.