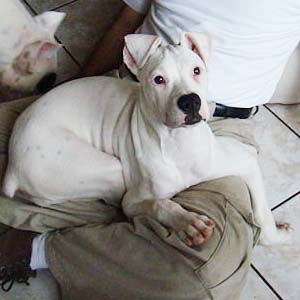 What is known about Dogo Guatemalteco history?

When comparing the two breeds against one another, some key points to look for are that the Dogo Guatemalteco will tend to be slightly shorter and smaller and will often have more patching on its head, particularly around the eyes.

While the breed is known as the national breed of Guatemala, there seems to be a waning interest in the breed that, if it goes unaddressed, could see this breed lost to extinction.

If the breed is able to find itself back into popularity, and enough of the breed is established as a strong base, it could be considered a potential stock dog for the newly developing American Bully breed. However, care should first be given to stabilizing the breed's existence in its pure form before consideration in adding to the American Bully stock unless viable mates are unavailable.

What are the Dogo Guatemalteco breed standards?

Muzzle:
Square and even without pronounced over or under-bite

Ears:
Cropped or uncropped set relatively high on the head

Chest:
Deep but not too broad as such can offset balance and dexterity.

Legs:
Relatively large but not too long or too short. Should promote a gait while walking not subject to roll or waddle. The walk should appear natural without effort.

Weight:
Should be held proportional to body size ranging from 77-100lbs

Color:
Primarily white with some minor black, red, or fawn patching on the head