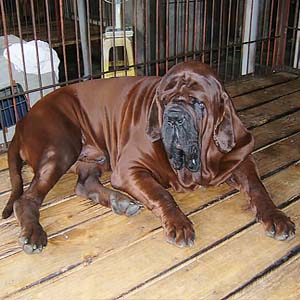 What is known about Dosa Inu history?

The Dosa Inu of South Korea or, as preferred to be called by Koreans, the Mee-Kyun Dosa, unlike its Japanese cousin, the Tosa Inu, was never bred to be a fighting breed.

While there is no clear history on the breed, it is believed to have been developed by crossing the Tosa Inu, Neapolitan Mastiff, and Dogue de Bordeaux. Additional breeds thought to have possible influence are the English Mastiff and Saint Bernard.

This breed is rarely seen outside of Korea and is not likely to gain a surge in demand as the closely resembling Neapolitan Mastiff, and Dogue de Bordeaux breeds are more readily accessible.

The Dosa Inu is the largest breed in Korea and can grow as large as 185lbs.

Given the nature of its breeding, strict companion owners often find that it loves to consider itself a lap dog, which can be a bit disconcerting given its huge size and weight. Also, because of their deep attachment to their owners, they can often experience separation anxiety when left unattended, then leading to destructive behavior.

What are the Dosa Inu breed standards?