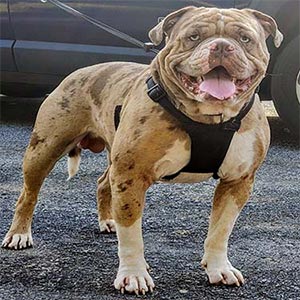 What is known about Alapaha Blue Blood Bulldog history

The Alapaha Blue Blood Bulldog was developed in the late 1800's by Papa Buck Lane and Rebecca and William Chester of GA and Cecil Evans and Kenny Houston of Florida in an attempt to rescue the plantation dog of Southern GA that declined to the near point of extinction. Breeds that made up the plantation dogs were those such as the now-extinct Mountain Bulldog, Old Southern White, and Old Country Big Bulldog. A Deeper look into history would show influences by additional breeds by various Spanish Bulldogs such as the Alano Español, Greyhounds, Beauceron, Danish hounds such as the Great Dane, Indian curs, and even deeper the now extinct Alunt. These breeds are known to make up the foundation stock of most Bully breeds in existence.

Some reasons for the decline of the breed can be seen in part due to society's trend to move more into cities.

Bully breeds are effective in working both as hunting and guard dogs. The Alapaha Blue Blood Bulldog is a muscular breed and maintains the bully attribute of loyalty. Historically this breed has survived in small enclaves in the southern United States held in possession by those more interested in the working purpose of the breed rather than in being accepted by those more inclined to the show dog ring.

While Many dog breed owners often debase merle, the expectation of the Merle trait is one that has helped set this breed apart.

Other breeds influenced by this breed include the Black Mouth Cur, Catahoula Leopard Dog, and Catahoula Bulldog.

The Alapaha Blue Blood Bulldog exhibits traits that make it an excellent candidate for breeding in the emerging American Bully breed, given the structure and qualities that it possesses.

What are the Alapaha Blue Blood Bulldog breed standards

Color:
Piebald (patched) preferred with any combination of colors including Merle

What does it cost to register my Alapaha Blue Blood Bulldog with the American Bully Association?

What does it cost to register a Alapaha Blue Blood Bulldog litter?

Where can I find a single Alapaha Blue Blood Bulldog registration form for my dog?

Where can I acquire a pedigree template for submitting my Alapaha Blue Blood Bulldog known genealogy / pedigree information?