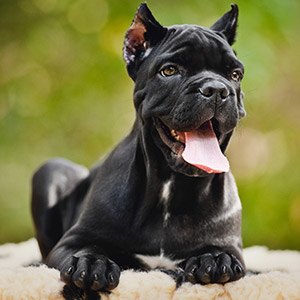 What is known about Cane Corso history?

The Cane Corso, a descendent from the Roman canis Pugnaces, is a large Italian breed closely related to the Neapolitan Mastiff. The breed's name came about from the words guardian and protector. As the population grows, this breed is becoming ever more popular in America.

The Cane Corso probably is as close to the old Roman war dogs as any current dog breed. Majestic, fierce, confident, and loyal are all exhibited traits of the Cane Corso. The Cane Corso, no doubt in its history, played a significant role in the development of some of the great molosser breeds like the American Pit Bull Terrier, American Bully, Neapolitan Mastiff, Great Dane, and others.

Cane Corso is used just as much as an adjective as it is a noun as it is a description based on tasks historically performed by the breed, supported by written documentation as early as 1137 AD. The Latin influence on the name is evident with the term canis influencing the term Cane in Italian, which means dog. Also, in Latin, Cohors means bodyguard that later influenced the Italian term "Corus," which is an adjective meaning sturdy or robust, all of which the Cane Corso is.

Artistically dogs very similar to the Cane Corso have been depicted throughout various points in history. From the III-IV century, a mosaic shows a very similar dog on a boar hunt. Again in 1390, a miniature sculptor exists depicting a similar breed, and The Reggia di Caserta a fountain from 1790, includes two. Several other examples also exist from the 1100s, late 1400s, and mid-1500's.

Over time, as people moved more into cities, there was less need for the hunt and protection the breed provided. This naturally led to a decline in the breed. WWI later further reduced the breed as their caretakers were called to duty. Soon after the war ended, a resurgence began until WWII, where the need for able-bodied men was again necessary. Additionally, natural disasters and food shortages also severely impacted the breed's population. By the 1970's, the breed was nearly extinct, with only a few examples left in the backcountry.

In 1974 Dr Poalo Breber began to resurrect the breed again by collecting some of the few remaining examples. Breber soon began to work with some other notables in the breed's history: Stefano Gandolfi and the Malavasi brothers from Mantova.

In 1988 Michael Sottile Sr. imported the first Cane Corso litter to America and then again another litter in 1989 of the same parentage.

Now in recent times, the breed has found that it enjoys a new surge in popularity and enthusiasm.

Because the breed shares much of the same history as other molosser breeds, it is not a surprise that it bears a strong resemblance to the American Pit Bull Terrier. Due to the shared lineage, the Cane Corso can be considered a good candidate in the now developing American Bully breed.

What are the Cane Corso breed standards?

Jaw:
Even to slightly undershot

Color:
Black, gray, darker shades of red and fawn. Brindling is also allowed. Small levels of white are permissible on the chest, throat, chin, and back of pasterns and on toes.