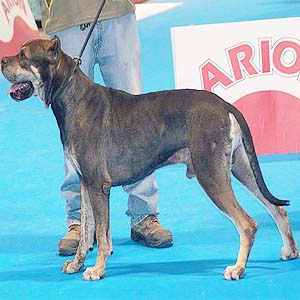 What is known about Alano Espanol history

The Alano Espanol, also known by the names Spanish Alano or Spanish Bulldog, is a large molosser type originating from Spain and historically was bred for such purposes as catching, hunting, and guarding.

While the Spanish Alano originated from Spain, interestingly enough, it got its name from the Iranian tribe, the Alani. During the 5th century, nomadic tribes from Iran moved into Spain, where they brought different types of dogs known for hunting, livestock guarding, and pursuit. These breeds formed the foundation of many of the Alunt type dogs we know today.

The first written reference to the breed in Spain is in a chapter of the 14th century "Book of the Hunt of Alfonso XI" (Libro de la Montería de Alfonso XI) in which hunting dogs called Alani are described as having beautiful colours.

In 1840, the English dog dealer Bill George imported a Spanish Bulldog he called "Big Headed Billy". He was used to increase the size of English Bulldogs.

As the world began to modernize and use for wartime, hunting and sporting activities diminished, the breed began to dwindle to near-extinct levels.

Concerned for the breed in the 1970s, a group of fanciers set about knocking on local doors to try and find any remaining specimens. Luckily a few viable mating options were found, and the breed was re-established.

Large dogs that are similar in appearance and may share the history of the Alano Español include the molossers of the Canary Islands such as the Dogo Canario (Perro de Presa Canario) as well as the Mastín Español (Spanish Mastiff) and the Dogo español (Spanish Dogo). Among some of the South American breeds descended from these dogs after being brought to newly conquered lands by the Spanish explorers and conquistadores are Cimarron Uruguayo, Dogo Argentino, the extinct Perro de Pelea Cordobes, and possibly, the Fila Brasileiro.

What are the Alano Espanol breed standards?

Height:
As an adult no less than 23 inches

Color:
Brindle of any color, fawn, black and brindle; sable wolf. White chest flashes are acceptable but prevalence of white is not. The face may or may not have a black mask.

Head:
Muzzle is short with the lower jaw slightly concave, and has a very large, broad, black nose.

Ears:
Set high and may be drop or cut short