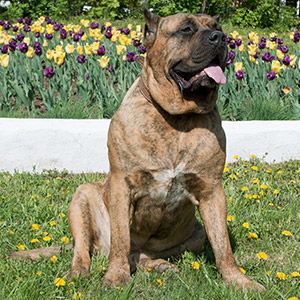 What is known about Perro de Presa Canario history?

The Perro de Presa Canario or often simply referred to as Presa Canario or just Presa, is a native of the Spanish Canary Islands. Breeds suspected in its development include the now extinct Bardino Majero crossed with imported English Mastiffs.

Interestingly enough, while many breeds are named after their country of origin, the Canary Islands were, in this case, actually named after the dog.

Originally bred to be a working livestock dog, the breed often found its way to being used in fights set up by bored farmers.

The breed is typically brindle or fawn and may contain minor white markings.

Like other bulldog breeds, this one too has been the subject of breed-specific legislation (BSL) in some parts of the world, such as Australia and New Zealand, where they are against the law.

Because the breed shares much of the same history as other molosser breeds, it is not a surprise that it bears a strong resemblance to the American Pit Bull Terrier. As such, this breed can be considered a good candidate in the now developing American Bully breed.

What are the Perro de Presa Canario breed standards?

Ears:
Cropped or uncropped, if cropped, the ears should be done with a medium crop with the remaining ear formed in the erect position

Color:
Any shade of fawn, black, and brindle