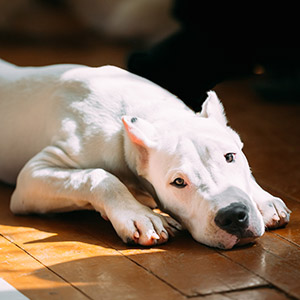 What is known about Dogo Argentino history?

The Dogo Argentino is credited to Antonio Nores Martínez primarily for its development for the purpose of big-game hunting, such as with Puma and Wild Boar. It was developed in 1928 by crossing several lines, including the Cordoba Fighting Dog, Great Dane, Boxer, Spanish Mastiff, Old English Bulldog, Bull Terrier, Great Pyrenees, Pointer, Irish Wolfhound, and Dogue de Bordeaux. It is remarkable the resemblance it has to the Pit Bull Terrier of old, so most knowledgeable breeders would profess that this breed or, at minimum, its close ancestors must have also had a strong influence. Others believe that some of the breeds' claimed to be used as mere fanciful discussion and not a reality based on the genetic traits the breed currently expresses.

The now extinct Cordoba Fighting Dog was developed from mixes of Mastiffs, Bull Terrier (pre egg-head), English Bulldog, and Boxer. Other than the Boxer, these breeds and or their ancestors are also believed to have influenced the development of the American Pit Bull Terrier either directly or indirectly through their ancestral lineage.

Comparing the Cordoba to the Pit Bull and the Dogo Argentino to the Pit Bull, one can easily see the resemblance. The breed is even often described as looking like a white American Pit Bull Terrier, but somewhat taller than the average Pit Bull is expected to be.

It is doubtful that many would be surprised if it was revealed that the dog actually came from primary Pit Bull stock exported during the early 1900s from America, given that white Pit Bulls at points in history were believed to be weak.

One of the most notable aspects of the breed is that it is often stark white. Scientifically, the term leucistic is used to describe all white animals yet prove not to be albinistic due to the presence of melanin as evidenced in a black nose. While this can have a certain appeal, it should also be noted that high levels of white are noted to be related to various auditory issues, including complete deafness. This is due to the fact that melanin plays a large part in auditory development.

Because the Dogo Argentino was bred to be a pack hunter, much of its predecessors' aggressive dog-on-dog nature has been bred out. However, like many of the molosser types, ownership has been made illegal in certain countries like Ukraine, Iceland, Singapore, Australia, the United Kingdom, and several cities in America.

Because the breed shares much of the same history as other molosser breeds, it is not a surprise that it bears a strong resemblance to the American Pit Bull Terrier. The Dogo Argentino breed can be considered a good candidate in the now developing American Bully breed.

What are the Dogo Argentino breed standards?

Muzzle:
Square and even without pronounced over or under-bite

Chest:
Deep but not too broad as such can offset balance and dexterity

Tail:
Lever shaped, should not be docked

Weight:
Should be held proportional to body size ranging from 88-120lbs

Color:
All white with occasional mark around the eye may be present but should be minimal. All other things being equal in showing the one with the most white is preferred.