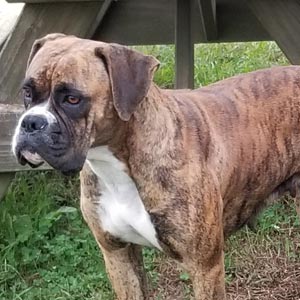 What is known about Boxer history?

Originally developed in Germany by Friedrich Robert, Elard König, and R. Höpner the Boxer dog breed is known for its classical underbite look. Developed from Old English Bulldog and now extinct Bullenbeisser. Unique to the breed, the first Boxer dog was exhibited in a show organized for St. Bernards in 1895, with the breed being formally established the next year.

Not surprisingly, the Boxer is one of America's most popular dog breeds.

Visually the length of the muzzle to the whole of the head should be a ratio of 1:3. Tail and ear cropping has been the norm but have been changing. When ears are cropped, they should follow the long crop look. While most show rings' expectation is that the tail is cropped due to laws in some countries making docking illegal, this may not follow true. In response to such laws, a line has been developed in the United Kingdom that has a naturally bobbed tail. There has been some backlash with some registries not allowing the bobtailed variety to be shown in countries where docking is legal.

The standard color for the breed is fawn and brindle; however, some white Boxers do also exist. While not enjoying the opportunity to be shown in most show rings, White Boxers are quite desired in their own niche market for everyday owners and breed enthusiasts. Excessive white also creates some risks of cancers, such as skin cancer, due to the lack of melanin that acts as natural sunburn protection. Also, because melanin plays an important role in auditory development, white Boxers experience higher levels of deafness.

This breed has also served as the foundation breed for the American Bulldog, which is a mix between Boxer and Pit Bull. Based on the higher degree of white in American Bulldogs, it is not unreasonable to believe that white Boxers were preferred when developing the American Bulldog breed. This has also led to some confusion, with white Pit Bulls often being mislabeled as American Bulldogs either out of honest confusion or in many cases in the attempt to try and avoid being victimized through breed-specific legislation ( BSL ) that often targets the Pit Bull breed.

While visually, the Boxer can be a deterring factor in guarding activity, it is known not to be vicious. Alternatively, it has been reported to be more stubborn, but many report greater success in reward-based training vs. operant conditioning.

During WWII, the breed was used as part of the war effort as a pack carrier, guard dog, and messenger.

The name Boxer is thought by some to have been developed by the tendency to stand on its hind legs and play box with its front paws. It is more likely that it was a corruption of the word Boxl, which the Bullenbeisser (Brabanter) from which it was developed were also called. Other theories also exist, but the truth is no one really knows.

What are the Boxer breed standards?

Color:
Fawn or brindle, black mask, with or without white markings, and white