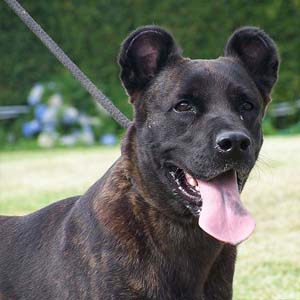 Cão de Fila de São Miguel or Cão de Fila da Terceira depending on the region is also often called the Azores Cattle Dog. There is some dispute as to whether these two are the same breed, with some believing they are and others believing the Terceira was a founding ancestor of the São Miguel.

The Azores are an island chain that is part of the autonomous regions of Portugal.

The breed has been documented from the early 19th century, and the first attempted standard was written by Dr. Jose Leite Pacheco in 1880 but was never formally recognized. The first official standard was not written until 1984.

While the dog is described as a cattle dog, more accurately, it is a molosser type, also known for its cattle work.

The tail is docked, and ears cropped traditionally, but due to changes in the laws in many regions, it is not uncommon for this not to be the case.

When the ears are cropped, a special style is used where they are cropped short then rounded. While there is no clear reason for this type of ear cropping other than tradition, it gives the breed a unique and distinct look.

When this breed is outside of its native Azores, it is shipped to collectors and sold as a rare breed.

Because the breed shares much of the same history as other molosser breeds, it is not a surprise that it bears a strong resemblance to the American Pit Bull Terrier. Because of the related linaeage the breed can be considered a good candidate in the now developing American Bully breed.

Historically it is believed to additionally be related to the Dogue de Bordeaux and the Bloodhound and is fabled to have been popular with pirates.

Tail:
Docked or un-docked. Should exhibit a short fringe when not docked.

Color:
Always brindle in shades of black, fawn, or gray