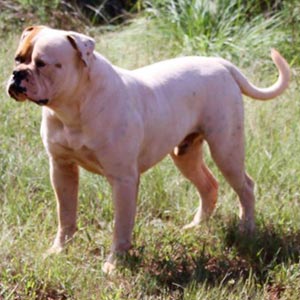 What is known about American Bulldog history

Due to the proliferation of breed-specific legislation aimed at the American Pit Bull Terrier, many pure white Pit Bulls have been falsely reported as being American Bulldogs, often due to their close relationship. The educated viewer can usually notice the key differences between the breeds. The American Bulldog should exhibit a shorter snout giving it a bit of a smashed-in look with the trademark large jowls of the Boxer.

There are two varieties of the American Bulldog known by their developer names Allen Scott and John Johnson. The Scott variety American Bulldog often looks similar to an oversized American Pit Bull Terrier. The Johnson-style American Bulldog is more pronounced in its look and more accepted by its collectors.

While piebald (patched) and white is the primary color/pattern of the coat, the secondary markings can be of any color or variation.

As with most Bully breeds, the American Bulldog is both strong and loyal. This breed is also known for its athletic nature and has been shown to be able to jump over 7 vertical feet. Because of its jumping ability, it is imperative that owners of the American Bully dog breed consider this when thinking about how their American Bulldog will be appropriately confined.

This newer bully breed can be quite varied in its size and appearance but is becoming more standardized as more people take an interest and genetic variability becomes more set. However, as with all breeds, preference, and trends can drive significant change, especially when the registered populations are in low numbers.

What are the American Bulldog breed standards

Color:
All white or piebald (patched) preferred with any combination of colors including Merle

What does it cost to register a American Bulldog litter?

Where can I find a single American Bulldog registration form for my dog?

Can I register an entire American Bulldog Family (Mom, Dad and Litter) simultaneously?

How long does the American Bulldog registration process take?

Where can I acquire a pedigree template for submitting my American Bulldog known genealogy / pedigree information?